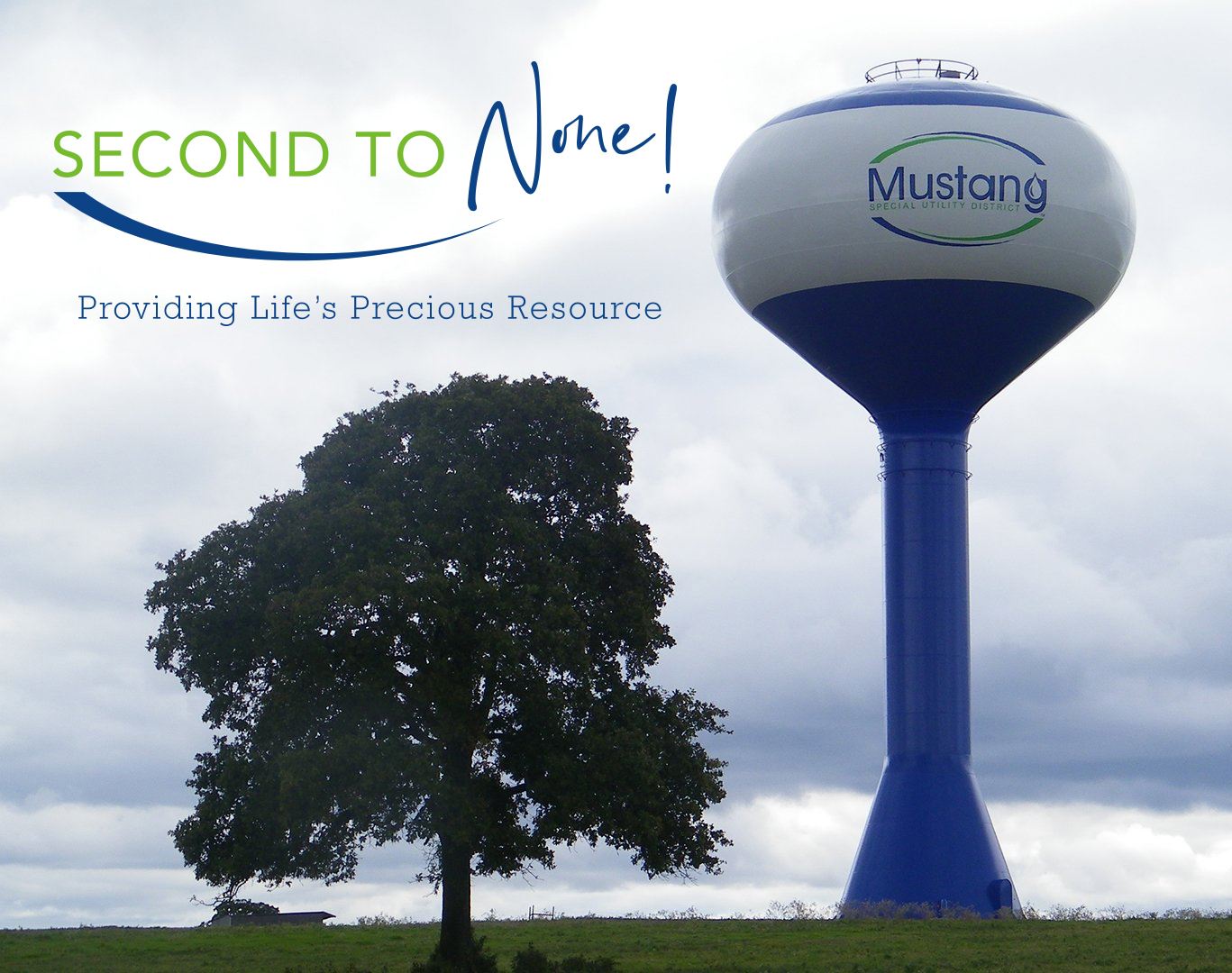 Mustang Water has been rated a "Superior Water Company" by the Texas Commission on Environmental Quality (TCEQ). TCEQ administers the Public Drinking Water Program under the authority of the U.S. Environmental Protection Agency (EPA). A superior water company has met standards that prove the company consistently provides quality drinking water.

Mustang Special Utility District (SUD) began as Mustang Water Supply Corporation and was incorporated on May 13, 1966. The corporation began with 50 connections and 5 Board members. Meters were read by each customer and new memberships were limited to available capacity in the lines.

By 1980, the system had grown to around 400 customers. Also that year, the first large storage tank, 20,000 gallons, was put in place at Well Number 2. In 1985, Mustang was awarded a Water Certificate of Convenience and Necessity (CCN) from the State of Texas to serve over 100 square miles of NE Denton County.

On May 15, 2000, the members voted to convert the Corporation to a Special Utility District, thus becoming a political subdivision of Texas. The process of conversion took two years and the Corporation was officially dissolved in 2002. The Kruger Water Works was purchased and the District began service to Krugerville. The Board also voted to name the first high-capacity pump station after long-time Boardmember Temple Dane.

In July 2001, the Board approved contracts with developers along 380 to share service rights, thus allowing the formation of Fresh Water Supply Districts within Mustang. These Districts are now better known as Paloma Creek, and Savannah subdivisions.

In 2002, Mustang was awarded a Wastewater Certificate of Convenience and Necessity (CCN) for the entire district. In 2004, the first wastewater customers came online in the Cross Oaks Ranch subdivision.

Rapid growth of Mustang created the need for additional office space. In 2006, Mustang held the groundbreaking for a new office building on FM 2931. The new office was opened later that year.

In 2011, Mustang went over 9,000 connections. The current system consists of ten groundwater wells, 2.8 million gallons per day of surface water capacity , and capacity in three wastewater plants. The largest project to date was the 2.25 million gallon Byran Road elevated storage tank, which went into service in 2009.

This year marked our 50th anniversary as a water utility.  Our Board of Directors celebrated the year with customer outreach events and a dinner honoring past Board members, employees, and founding customers.

A year marked by impressive projects to improve the system, 2019 set many new records. A 2 million gallon elevated tower was built along Highway 377 and named for William Hathaway, our longest serving Board President, who presided over years of exponential growth and development unheard of before his time. Along our eastern border, Houlihan ground storage and pumping station was created. This station will serve the newest subdivisions while allowing Mustang to loop our entire water infrastructure, supporting future and current customers. Houlihan was named for and dedicated to Robert Houlihan, the longest serving Board member, who served Mustang well. This year also marked the setting of our 20,000 meter!

What could best describe the year 2020- other than WOW!  Mustang, like every other essential business was impacted by the Covid-19 pandemic.  When the virus began its march through our nation in spring of 2020 Mustang Board of Directors and Management made strategic decisions to create new policies and procedures to protect our water system, staff, and customers.  For several months Mustang staff worked on a rotation schedule to keep water flowing, new meter sets up to speed, and protect the health of our staff members while still achieving every goal of our organization.  We limited our lobby to "Appointment Only" status, so that common areas could be sanitized, keeping the health of our customers as a firm priority.  In order to financially support our customers, the Board voted to suspend disconnects for several months during spring and summer, resuming disconnections at a higher than normal dollar amount once businesses in our area were able to re-open. By year's end Mustang had another record year of growth, while successfully managing to protect our stakeholders!

During first quarter 2021, Mustang SUD currently has over 22,800 connections!  We successfully continued operations during an historic winter storm that challenged every operational and administrative function of our District.  To report that we are proud of our amazing staff would be an understatement!

A Special Election to allow Marilee SUD to consolidate into Mustang was held in November. Upon consolidation, Mustang has approximately 29,500 customers.

View All
/FAQ.aspx
Make a Payment
Start & Stop
Notify Me®
Lookup Maps
24 Hour Emergencies
Contact Us
Annual Report
Our annual report is provided for your information and transparency.
Government Websites by CivicPlus®
[]